Visa network crashes in the UK and Europe

Millions of Visa clients all around the UK and Europe suffer significant problems with their cards, as the payments are experiencing disruptions, the BBC reports on June 1st. The problems that appear mainly to be with chip and pin transactions have begun at approximately 2.30 p.m. on Friday, leaving some people unable to complete payments. 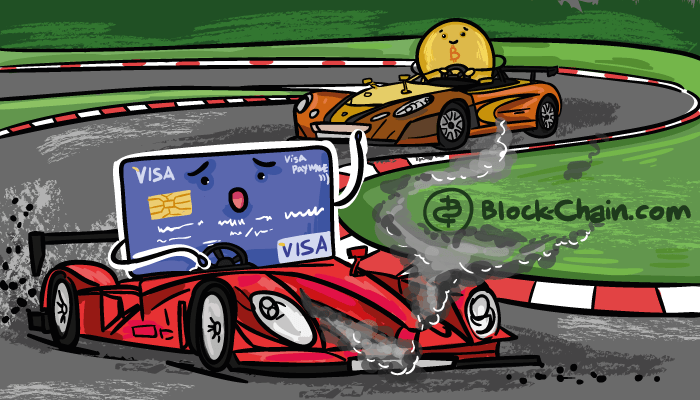 Visa crashes rather often, that time bitcoins stays stable for 99% of lifetime

Still, ATM transactions are not affected and so aren’t Mastercard and American Express, so consumers have backup payment options. Also, cash withdrawals are functioning correctly.

The payments look to customers like they are being declined just as if their card had insufficient funds, while the issues actually serve as a consequence of the network crash. Retailers report they are unable to complete payments in shops, bars, and other outlets, so they are forced to resort taking cash. Even customers not using Visa have suffered several difficulties since the Visa network provides payment systems for certain shops and financial institutions. Several retailers, including Marks & Spencer Sainsbury’s confirmed they were facing technical issues, but others did not report any problems with transactions from Visa contactless users on their services.

Visa, which handles over 150 million transactions per day, has commented the system failure on Twitter by saying they were currently experiencing service disruption across Europe. As declared, they are investigating the cause, and the resolving of the problem is in process. An Asda spokesman made a suggestion the problem was with the authorization sent to chip and pin machine when a transaction is being made.

Whilst Visa is investigating the cause of the failure; we recall that the Bitcoin ’s decentralized network has successfully functioned 99,99% of the time since it was incepted on January 3rd, 2009.

Ultimately, businesses across Europe and the UK were unable to make Visa transactions for around 6 hours on Friday. In the early hours of Friday, Visa posted an official comment on Twitter, saying that the system was operating at full capacity and that the cardholders were able to make payments with Visa cards again. The company admitted it has not achieved its goal of having its system operating all of the time and stated the fault as “the result of hardware failure”. Although Visa apologized for the situation, it did not comment in any way on whether retailers will be compensated for lost earning, as some customers have reported that funds were taken from their accounts, whereas the payment was declined in a store.