9,9% of Germany's WEG Bank was purchased by Litecoin and TokenPay partnership

TokenPay, a decentralized and self-verifying crypto-fiat payment platform, published an official announcement this Tuesday, July 10th about its cooperation with the Litecoin (LTC) Foundation. This strategic partnership allowed the non-profit supporting the popular cryptocurrency to acquire a 9,9 percent stake in Germany’s WEG Bank. 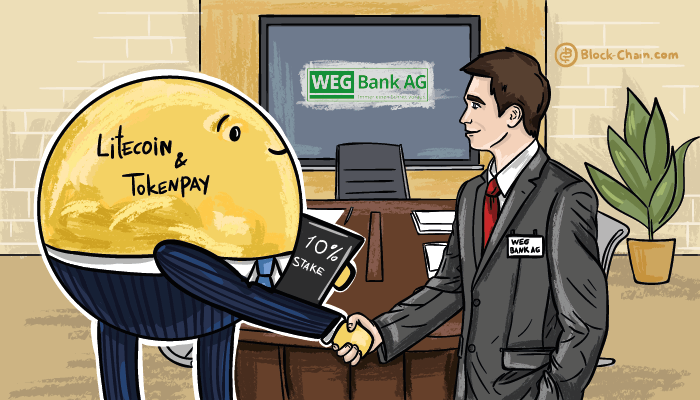 Token Pay joined with the Bank this May and attained near 10 percent equity share along with the option to purchase up to 90 percent. According to the official statement, the funds for this were derived from a December token sale.

The stake was transacted to the Litecoin Foundation in the framework of a bargain, in terms of which the latter will provide its technical assistance, including blockchain and marketing expertise to the benefit of TokenPay’s various blockchain projects and business operations. In particular, under the deal, the Foundation give TokenPay the access to its multiple users who will have a chance to trade and sell TPAY and to enroll the company’s card services.

“This partnership is a huge win-win for both Litecoin and TokenPay. I’m looking forward to integrating Litecoin with the WEG Bank AG and all the various services it has to offer, to make it simple for anyone to buy and use Litecoin. I’m also excited about Litecoin’s support in TokenPay’s eFin decentralized exchange.”

WEG Bank usually focuses on providing financial services to real-estate clients. Matthias Von Hauff, the bank’s founder and CEO, noted that although the partnership between TokenPay and the Litecoin Foundation was initially unexpected for the institution that he characterized as very conservative, he has high hopes on it.

He firmly believes “the future of banking will make adoption of such modern payment methods inevitable.”

It seems like some major companies of the crypto industry are creating an ecosystem resembling the traditional financial sector more closely that it is now. Coinbase, one of the most significant crypto exchanges, recently launched custodian solution for crypto assets and announced its intentions to acquire federal banking license.