It seems clear now that Apple has decided to revise its App rules on crypto industry recently, following the example of Google, Facebook, and Twitter, and has taken several steps to tighten the grip. As it was announced over the weekend, the firm has updated rules for publishing Apps in the App Store, and the main change affects those related to cryptocurrency mining. 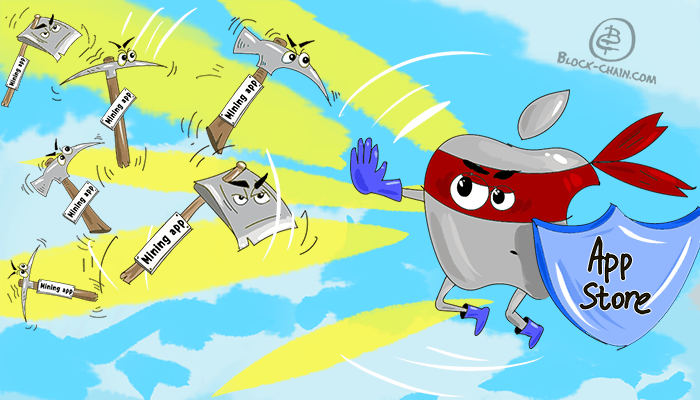 No more fraud mining apps at the AppStore

A group called The Developers Union demanded to register new guidelines, and it seems that their requests may be paying off, as new regulation seems quite strict. The rules will apply to all apps that can be downloaded in the store, whether they are new or already existing.

The new rules include following clauses:

Indie developers are not allowed anymore to publish wallet apps on the App Store. A developer needs to be affiliated with a registered organization to do so. This is reasonable, like last December, the company accidentally published a fake version of the popular app called MyEtherWallet, that even made it to the top list in the finance category of the App Store before Apple noticed its mistake and pulled it down.

Apple forbids apps to do crypto mining activity within the device; however, the firm added that apps could provide services on cloud mining. The reason for that is the degradation of battery life and device performance because of mining. Apple stated that apps shouldn’t rapidly drain the battery, put unnecessary strain on device resources and “run unrelated background processes, such as cryptocurrency mining”. It is worth mentioning that this rule also protects users from virus apps that secretly mine cryptocurrencies. Most warnings come from Android developers that identified a decent amount of secretly mining apps in December 2017, but now we know for sure that Apple is safe.

Also, third-party apps providing crypto transactions or transmissions are restricted, since only official apps developed by the exchange itself are allowed to provide such services.

Apps promoting Initial Coin Offerings, currency futures trading and another crypto-security trading must come from approved financial institutions such as established banks and security firms. These rules apply to apps providing crypto services and stem from the rising frauds.

Moreover, apps are not allowed anymore to offer cryptocurrency as a reward for completing tasks, encouraging users to download other apps, post to social networks and etc.

It must be admitted that these guidelines for crypto-related apps make sense since the number of frauds using fake apps and websites is rising. The restrictions will definitely make some developers lose money, however, considering the amount of public money flowing into the unregulated sector, this decision is reasonable.