Last month, Goldman Sachs, the fifth-largest bank in the U.S., has hired crypto-trader Justin Schmidt to fill a post of vice president in their recently established Cryptocurrency Unit. 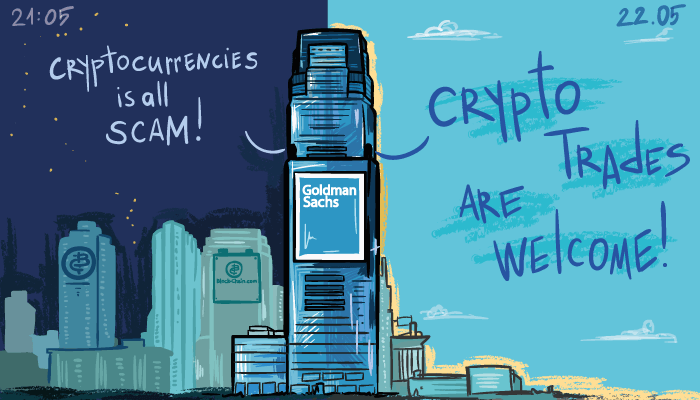 Schmidt, a former trader, is officially holding a VP position and the Head of Digital Assets Market department since April 16. Having a computer science degree from Massachusetts Institute of Technology, he previously held the post of the Senior Vice President at trading firm Seven Eight Capital, LLC. The firm is applying heavy math computations and quantitative analysis to identify trading opportunities. Among other working places of Justin Schmidt are financial companies such as LMR Partners and WorldQuant LLC.

"In response to client interest in various digital products, we are exploring how best to serve them in the space," explained Goldman Sachs spokeswoman Tiffany Galvin-Cohen.

Naturally, banks are still skeptical about cryptocurrencies. Citi Privat Bank based on its extensive analysis doubts that any of cryptocurrencies will survive, comparing them to “lottery tickets.” The bank though advises having a small number of digital currencies in the investment portfolio. In September 2017, the JPMorgan Chase & Co. chief executive officer Jamie Dimon said Bitcoin was “worse than tulip bulbs,” expressing regards on this comments later on, as reported in Bloomberg January 2018.

Goldman Sachs in their report dated February 5, 2018, is concluding that recent price swings indicate a bubble and investors should prepare to lose their coins. Now, a couple of months later, Goldman Sachs is preparing to launch yet another crypto market on Wall Street, starting from the limited number of to trade Bitcoin as a non-deliverable forward, without exchanging actual asset of Bitcoins due to security concerns. Along with the skepticism being around cryptocurrencies, Wall Street firms have already started offering Bitcoin futures trading to their clients.