Bitcoin dominance got over 50% first time since long ago

According to CoinMarketCap, for the first time in six months, the dominance of bitcoin over other crypto-currencies exceeded 50%. The last time this indicator was registered in December 2017. 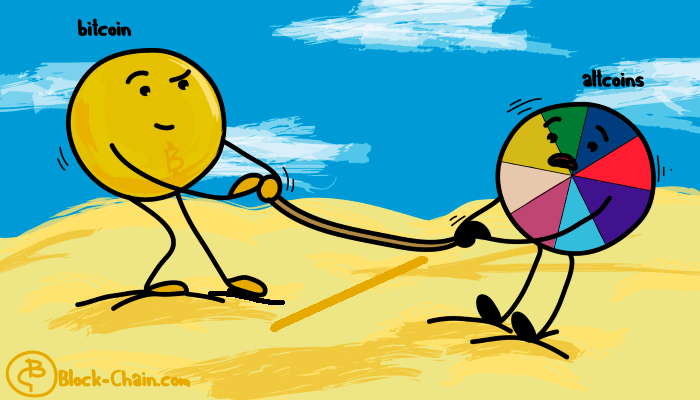 Bitcoins pushes hard and takes over 50% of the market

Since the beginning of the year, there has been a gradual decline in the value of most digital assets in the crypto-currency market, and this phenomenon is developing disproportionately. Bitcoin falls not so fast, and sometimes even shows attempts at growth, while other cryptocurrencies become cheaper much faster.

Over the past day, the price of bitcoin has fallen by 5%, while the altcoins have lost 8-12%. The total capitalization of all crypto-currencies decreased to $ 209.4 billion, of which $ 105.5 billion accounted for bitcoin.

Head of the technical analysis department of Renaissance Macro Research Jeff de Graaf, one of the best technical analysts with Wall Street according to Institutional Investor Magazine, believes that at the moment the price of bitcoin is the maximum. And if bitcoin falls below the key support level in this year (6500$), then its price will continue its downward movement and will not be able to recover.

Earlier, head of Tugush Blockchain Capital Timothy Fortunatov noted that if in the near future bitcoin does not manage to rise above $ 7000 and gain a foothold at this level, then most likely it will be traded at $ 6500 with minor deviations in one direction or another for quite a long time.