Bitcoin or gold: which one is cheaper to mine?

O tempora! O mores! Panda Analytics concluded, after thorough researches, that gold mining is 20 times more expensive than mining of bitcoin, the world’s first cryptocurrency by market capitalization (and not only). 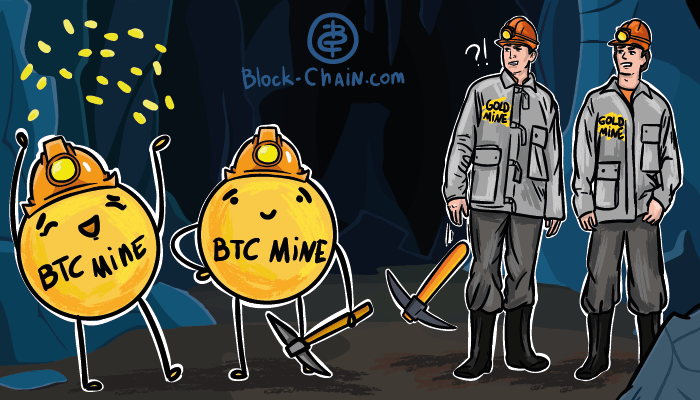 Essentially, gold mining requires 20 times more energy in comparison to the digital asset, although there is a strong opinion that the leading cryptocurrency is actively impacting the environment in a very negative way.

According to the data collected by specialists, every year more than $87 billion USD is spent on gold mining, whereas bitcoin costs only constitute $4.3 billion USD. Figures show that only 0,07% of the energy consumed in a year all around the world is spent on bitcoin mining, which is a very modest part.

As Panda Analytics team is sure, it is incorrect to compare energy consumption of mining of the first cryptocurrency and energy costs of small countries like Ecuador, since these two concepts have nothing in common, these are just different categories.

As the Barrick Gold Corporation report for 2017 states, it takes $794 USD to get one ounce of gold. Since annually the volume of gold production reaches 88 million ounces, it total it takes $70 billion USD. However, the company develops the one of the most budgetary gold deposits in the world, and if we assume that on average, the cost are 25% higher, the figures will be $87 billion USD.

Therefore, there is no doubt that bitcoin mining energy consumption is the the lesser of two evils. Paul Krugman, US economist, have expressed his opinion lately, saying “Gold is dead… Bitcoin has more utility than gold.” This statement was pretty unexpected,as only a couple of months ago he had called the world’s leading crypto an instrument “setting the monetary system back 300 years.”