On September 8, during his interview to Bloomberg at the Hong Kong Ethereum Industry Summit conference, Vitalik Buterin expressed his view on the current state of distributed ledger technology as well as on the evolution of the cryptocurrency market. 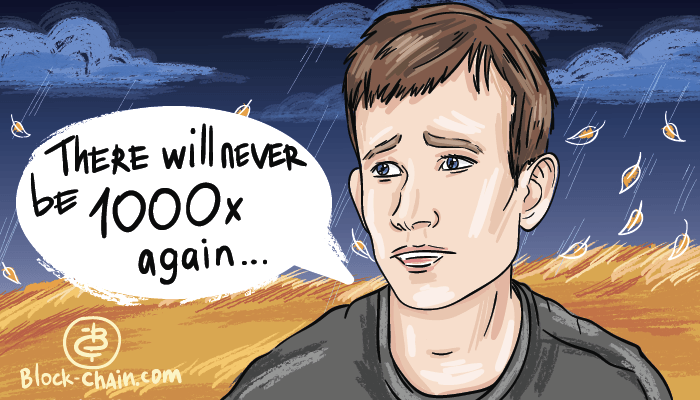 In his opinion, the growth of crypto industry has reached its limits, and now transiting from being people’s simple curiosity to the real world economic applications. Buterin says that due to evolved awareness regarding the technology, the period of extreme growth is reaching its end.

“If you talk to the average educated person at this point, they probably have heard of blockchain at least once. There isn’t an opportunity for yet another 1,000-times growth in anything in the space anymore,” he said.

Indeed, after reaching the record $828 billion point, the total crypto market cap started to fall down to the current $198.8 billion, as it was back in November 2017. Despite the all-year decline, the total market cap still has higher values than in early 2017, when capitalization was between $17 and $20 billion.

Vitalik also expressed his skepticism about cryptocurrency trading in general:

“There’s honestly a part of me that would be happier if institutional trading of cryptocurrencies did not happen at all for another five years. Ultimately if all that cryptocurrency is, is this thing that millionaires keep buying and selling to each other, then what have we really accomplished?"