At the beginning of the year, multiple crypto sources predicted that bitcoin would get severely forked in 2018. One must say, they were right, as the last year saw 19 forks, whereas within the past 10 months 44 forks of the Bitcoin protocol have emerged, including bitcoin Private, Bitcoin Diamond, Bitcoin Gold, Bitcoin Candy and so on. 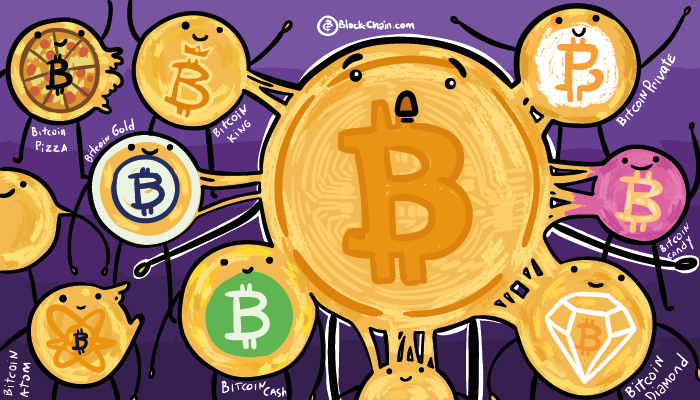 The starting point here was August of 2017 when the initial Bitcoin Cash hard fork occurred. However, it looks like crypto investors don’t take them seriously, considering them anything more than money grabs.

CEO of a popular mobile cryptocurrency wallet Coinomi, George Kimionis, revealed his skepticism about their true intentions. As he stated, the majority of bitcoin forks aim to latch on to the Bitcoin name and to earn a quick income:

“Unfortunately, most fork-based projects we see today are more of a sheer money grab. Looking back a few years from now we might realize that they were just mutations fostered by investors blinded by numerical price increases — rather than honest attempts to contribute to the blockchain ecosystem.”

But what exactly is a fork? A hard fork occurs when an invalid block is mined by allocating the hash power into the Bitcoin protocol. For instance, Bitcoin Cash, the most successful one, had several Chinese mining companies such as ViaBTC backing the project, so hence was able to mine an invalid block to start the Bitcoin Cash chain. Noteworthy, not all forks have hard-forked the protocol legitimately.

Projects like Bitcoin Candy or Bitcoin Pizza are attempting to use the dominance of the bitcoin over the market to make quick profits and hardly receive sufficient backing. So basically, forks are clones of Bitcoin software, released under a new name with a new coin, often improved functionally.

Bitcoin XT has become one of the first notable hard forks of the Bitcoin protocol. It was launched by Mark Hearn in 2014 on purpose to include several new features proposed by him. The quantity of allowed transactions per second has increased from 7 to 24, and the block size has grown 8 times bigger. Bitcoin XT was considerably successful, as more than 1,000 nodes were running on its software in the summer of 2015, but several months later it lost user interest. It is still available but abandoned.

When Bitcoin XT fell down, there still was a need for block sizes to increase, and in early 2016 a group of developers launched Bitcoin Classic. Unlike the previous one, it only doubled the block size. The software also saw initial interest with 2,000 nodes running on it in 2016, but now the crypto community has moved to other options. Nonetheless, it still exists today, with some developers strongly supporting the project.

The idea of Segregated Witness (SegWit) was presented in 2015, and it was technically a soft fork, which has helped to prompt hard forks. SegWit reduces the size of each bitcoin transaction, allowing more transactions to take place at once.

Bitcoin Cash was launched in order to avoid the Seg Wit protocol updates, offering users the blocks of 8 megabytes. It has rapidly become popular, and in August of 2017 it split off from the main blockchain when bitcoin cash wallets declined bitcoin transactions and blocks. Still, it is the most successful fork of bitcoin, and currently, bitcoin cash is the fourth-largest cryptocurrency by market capitalization.

Following Bitcoin Cash, Bitcoin Gold appeared in the autumn of 2017. It was launched to restore the mining functionality with graphics processing units to simplify mining concerning equipment and hardware required. It featured a “post-mine” process, and due to it, the development team mined 100,000 of coins after the fork was created. A part of this coin was placed into a special “endowment” used to finance the bitcoin gold ecosystem.

Soon after the first version was launched in August of 2017, the addition known as SegWit2x was planned to release to trigger a hard fork stipulating a block size of 2 megabytes. However, it was not accepted by all companies and individuals that initially backed the SegWit protocol. Shortly after the announcement, the team behind it canceled the planned fork as a result of rejection among previous backers of the project.

Bitcoin Private, launched at the beginning of 2018, is not the same as other bitcoin forks. Unlike others, it wasn’t generated directly from bitcoin, but it appeared as a merged form of zclassic and bitcoin. It is considered to be the first privacy coin forked off the primary cryptocurrency, intending to add expandability to the bitcoin blockchain. It uses a 2 MB block size, 2.5 minute block time and GPU-friendly proof-of-work algorithm for mining.