Coinbase, the best-known cryptocurrency exchange in the U.S. based in San Francisco, discussed the possibility of receiving federal banking license with the U.S. regulators, The Wall Street Journal reports. 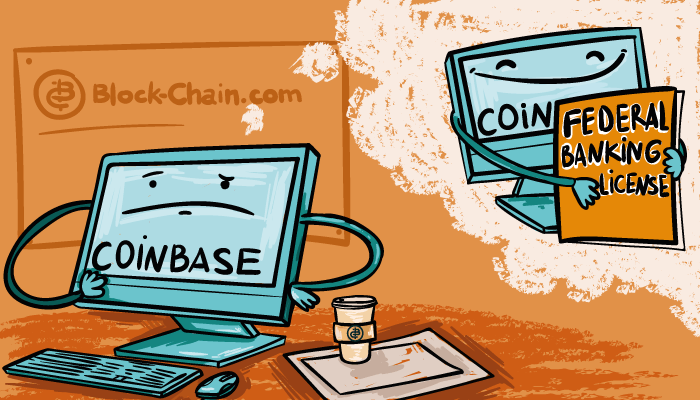 This week the Coinbase has already announced new products in development, including custody services and enhanced trading tools, focused on institutional investors. In order to work with large investments, customer assets should be held by qualified custodians such as banks or brokers. The banking license would help the Coinbase to provide its clients with custodial services allowing to securely save large amounts of digital coins removing the need to partner with a bank. The company is developing its cryptoasset management solutions in partnership with Electronic Transaction Clearing Inc., a company approved by U.S. Securities and Exchange Commission, Bloomberg reports. In order to get the license, Coinbase will have to fulfill a number of requirements and follow new regulations. As the Controller of the Currency Joseph Otting said at the banking association meeting in April, the most of the FinTech firms that want to acquire a banking license are not able to go through the tough rules.

Although several countries including France, UK, India and China have either prohibited cryptocurrencies or introduced strict regulations, the development of both the FinTech and the blockchain technology itself is advancing. In the U.S. financial sector, a number of major organizations are preparing cryptocurrency initiatives. The Goldman Sachs, an American multinational investment bank, one of the biggest in the world, is preparing to launch a cryptocurrency market on Wall Street. The bank announced earlier in May that it will start trading Bitcoin futures. The Intercontinental Exchange - the parent company of the New York Stock Exchange, announced its plans to enable customers buy and hold Bitcoin on the new online trading platform. The U.S. government is trying to optimize the regulations for cryptocurrencies after the Securities and Exchange Commission checks the cryptocurrency business. Recently Portugal’s parliament set the goal to develop regulations that will allow cryptocurrency-related services to expand within the country and to ensure user’s safety using these payment services, ccn reports May 4. On the last G20 summit in March, G20 community has acknowledged the “technological innovation” behind cryptocurrencies and its potential for progress in financial system and economy, and has called for proposals of cryptocurrency regulations to come by July 2018, according to ccn.