The Great Crypto Crash of 2018 has officially reached a new level, deserving a record book, since now it is worse than the dot-com bubble burst. This Wednesday, digital assets plumbed new depths and, according to the MVIS CryptoCompare Digital Assets 10 Index, its meltdown to 80%. Now it has even surpassed the Nasdaq Composite Index’s 78% lowest point decline after the dot-com collapse in 2000. 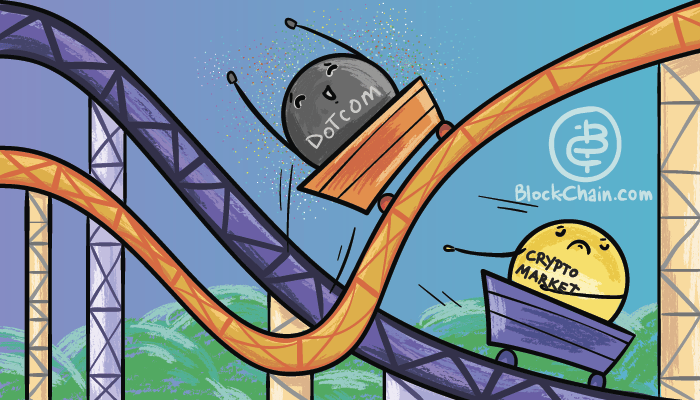 Dotcoms finally went up so when Crypto will do?

Like those who bet big on the aforementioned bubble which bursted almost 20 years ago, people who invested in the cryptocurrencies are now bearing serious losses and facing disappointment in a seemingly promising technology. Neil Wilson, working as a chief market analyst at a foreign-exchange trading platform Markets.com, expressed his scepticism about the whole industry:

“It just shows what a massive, speculative bubble the whole crypto thing was -- as many of us at the time warned.”

Ethereum, the second-largest cryptocurrency by market capitalization, led Wednesday’s losses by falling 6 percent to $171 USD and therefore extending its month’s collapse to 40%. Most altcoins are in the red, losing from 3 to 13%. Now the value of all traded cryptocurrencies evaluated by CoinMarketCap.com, dropped to $187 billion USD, which constitutes a 10-month low.

This might be the industry’s negative reaction at SEC’s decision to delay VanEck and SolidX Bitcoin ETF approval made in this August, which was followed by an immediate plunge of the market.