DeFi segment analysis and what will further?

Decentralized finance has captured the attention of all crypto enthusiasts since May 2020. This period can be called the beginning of the heyday of DeFi. It all started with the release of the Compound token from the project of the same name. It has grown tenfold and many wanted to repeat this success. As a result, we saw hundreds of new DeFi products over the next months. 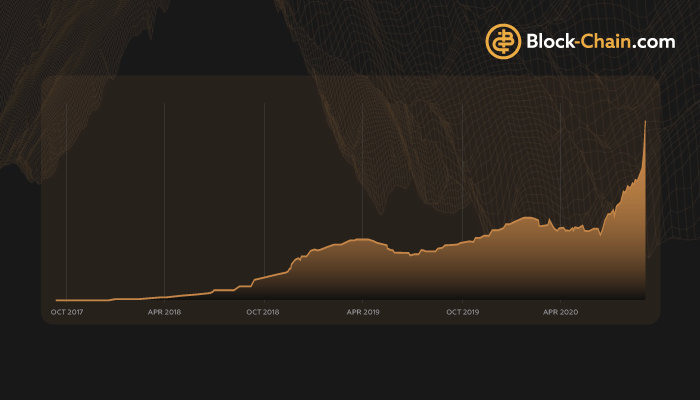 But where did it all start?

The first project that implements the DeFi concept was MakerDAO in 2017. It was the first in the crypto industry which create the possibility of decentralized lending and the creation of the DAI stablecoin backed by Ethereum. But at that time, few people paid attention to this project, because it was 2017 - the peak of the ICO bubble. At that time, almost all altcoins increased by thousands of percent within a few months.

Maker's price also increased 74 times over the year and performed one of the best performing altcoins. Then the ICO bubble burst and the hype around altcoins died down. MKR trading volume fell from $1 billion to $10 million per day.

However, after Maker, other DeFi projects appeared, such as Synthetix, ETHLend and others. But for the first time, the concept of decentralized finance appeared only in 2019. Then only a few understood what it was and which projects can rank among them. Everyone was puzzled by the new trend - IEO. Such projects also significantly increased their value, but not as much as during the ICO.

At the same time, in IEO, one could notice the presence of DeFi projects, for example, Kava and Akropolis. DeFi again remained on the sidelines and did not become popular.

But in the winter of 2019-2020, the popularity of DeFi began to grow. Many factors contributed to this, but the main one of them is the possibility of low, but stable earnings. After the collapses of the crypto market in 2018 and 2019, only ardent fans of cryptocurrencies and decentralization remained in the crypto industry. They began to look for a way to preserve and increase the cryptocurrency, and it was here that everyone remembered about credit protocols, that is, DeFi.

They allowed you to invest money at interest and take loans secured by cryptocurrency. At the initial stage, this was enough to provoke increased interest in the DeFi segment. Over time, this interest only intensified and there was talk that DeFi was the next trend. This was indirectly evidenced by the increased number of hacks on DeFi projects such as dYdx.

It wasn't just lending protocols that began to be referred to as DeFi around this time. So, all DEXs were eventually renamed DeFi - 0x, KyberNetwork, Uniswap and others. A similar situation happened with oracles, which became necessary for DeFi projects. The most prominent example is Chainlink.

At the moment, the DeFi classification is very multifaceted and includes:

At the beginning of 2020, it seemed that DeFi should be the main event of the year. But it turned out that before this there will be another global event - the halving of Bitcoin. Until June, there was talk from everywhere about halving and how it would affect Bitcoin and the entire crypto market. In the end, it eclipsed DeFi again. And only when the noise around this event died down, the trend around DeFi began to flare up.

How has DeFi changed in numbers over the past year?

To determine how strong the trend is for decentralized finance, it is necessary to analyze the key indicators of the entire segment and individual projects.

The main metric by which DeFi is judged is True Value Locked (TVL). It shows how many assets are frozen in all DeFi projects. So this value has increased 17 times in 1 year! On October 1, 2019, this value was $650 million, and today, on September 30, 2020, it is already $11.1 billion. Explicit demand dynamics that began to increase sharply from June 2020. 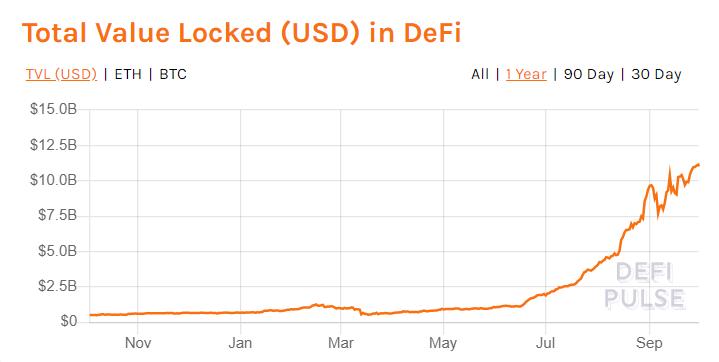 Also take a look at Uniswap. A year ago, the daily trading volume was about $600,000 per day. A year later, Uniswap entered the top-10 most liquid exchanges with a trading volume of over $1 billion per day. By this indicator, Uniswap has surpassed such giants as Coinbase Pro and Kraken.

At the same time, the number of visits to the Uniswap exchange increased from 14,000 to 4 million in 4 months. Based on this, we can say that Uniswap is the first DEX that is a real competitor to centralized exchanges.

Another interesting statistic is the number of DeFi projects in the top-100 by CoinMarketCap rate. At the beginning of October 2019, only 5 projects nominally assigned to the DeFi sector were in the top-100: ChainLink, Maker, 0x, Augur, Synthetix. At the current moment there are 24 such projects! Moreover, 7 of them are in the top-30.

We would like to separately note the Wrapped Bitcoin (WBTC) project. It is a token on the Ethereum platform that is pegged to Bitcoin 1:1. To create WBTC, you need to block real Bitcoin in a special smart contract. This is done so that the Bitcoins that are in storage can be used to maximize profits through participation in DeFi projects.

A year ago, the total number of WBTC was 576 tokens. After 365 days, this amount increased to 92,000 WBTC (0.44% of the total Bitcoin emission), which is $1 billion at the September 30th. TVL metric growth was over 16,000%! This means that DeFi affects not only the Ethereum ecosystem, but also Bitcoin. The total supply of Bitcoin in the market decreases and as a result its price increases. 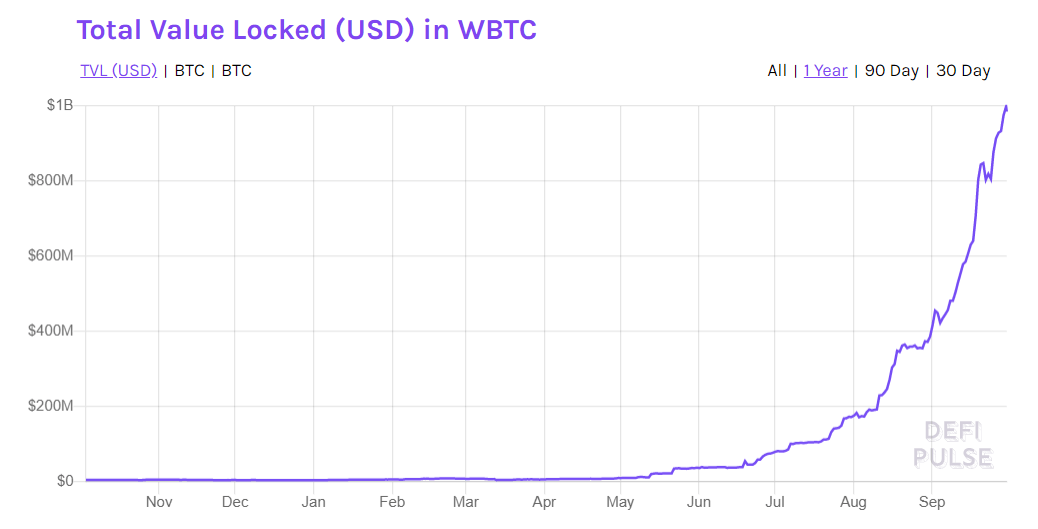 Similar trends persist in many other DeFi projects: an almost complete lack of activity a year ago and a sharp rise in the summer of 2020.

What to expect from DeFi and is it a bubble?

DeFi has been in the shadow of other trends for a very long time - ICO, IEO, Bitcoin Halving. Many people still do not understand what DeFi is and how they can be useful to the community. Now all the excitement arises from the ability to quickly and a lot of money, however, this is a bad approach. It is because of this that bubbles appear.

Leaving aside the big earnings in DeFi at the current moment, there remains an excellent technology that should become a new stage in the cryptocurrency industry after the creation of Bitcoin and Ethereum. It is DeFi that fulfills the dream of many crypto enthusiasts, as with their help, control over money completely passes into the hands of users. Intermediaries in the form of banks and centralized exchanges are no longer needed.

DeFi could become a new benchmark for the growth of the entire cryptocurrency market. Moreover, this growth can last from 1 to 2 years. It must be understood that speculation and Yield Farming are not fundamental things. It is they who inflate the bubble, which will collapse sooner or later.

As a result, technology will remain, just like blockchain or smart contracts. And the projects that will be the first to use it will be able to become one of the leaders in the entire cryptoindustry.

Our Block-chain.com platform can help with this. Soon we will present our DeFi builder, with which anyone can create their own DeFi project without programming knowledge and large financial costs.