Ethereum beats Ripple and takes back its second place

Is the market starting to recover? Almost all markets are in the green today and yesterday the whole blockchain and crypto industry was astonished by fairly surprising news, as Ripple (XRP) surpassed Ethereum (ETH) in price and took honorary second place in the list of cryptos. 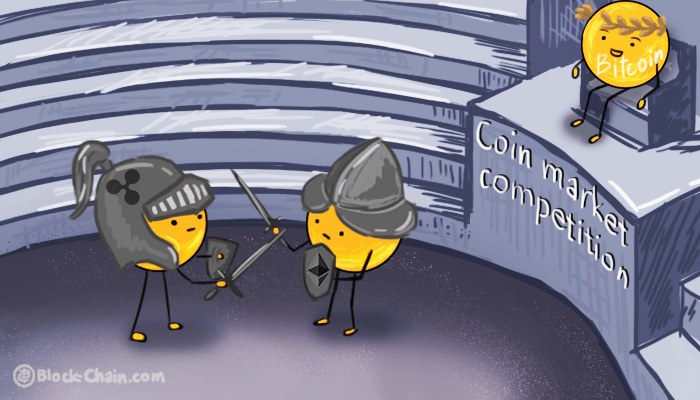 Coin market competition is simple, there is only war for 2nd place currently

But now we are witnessing an epic battle between these two assets, as they have swapped the positions again, for the second time today. This event is a very positive sign for the industry that has been down for the last 10 months and is finally showing green trends.

It all started a few days ago when Ripple announced the launch of the xRapid payment system and at the same time PNC Bank stated it was going to start using the Ripple network in order to make international transfers easier and more convenient. It all seems to have prompted dramatic price surge in Ripple, demonstrating the 24-hour growth of over 45 percents per coin and later reached a high of almost 110 percent per coin.

However, the displaced Ethereum was very quick to respond and surged in price, too. The growth was not such rapid and impressive, but it constituted decent 8,30% due to the fear of losing its privileged position of a cryptocurrency following bitcoin. In terms of a market capitalization, the market extended at a billion dollars in just an hour.

Such rapid changes of the Ripple native currency shocked investors by surpassing ether for the first time since December 2017. At present it’s not quite clear why Ethereum responded in this way to the XRP price move and the only guess we can make is that ETH fans didn’t want their favourite cryptocurrency to take third place. Indeed, cryptomarket is full of surprises - and the battle is still on.