Ethereum or TRON. Who has the odds in their favor?

TRON, a Chinese startup, has managed to raise $70 million USD right after its successful ICO in September of 2017. As we can see now, almost every big and ambitious crypto exchange lists TRX, the token of the project, which is definitely aiming at the list of 10 largest cryptos by market capitalisation. 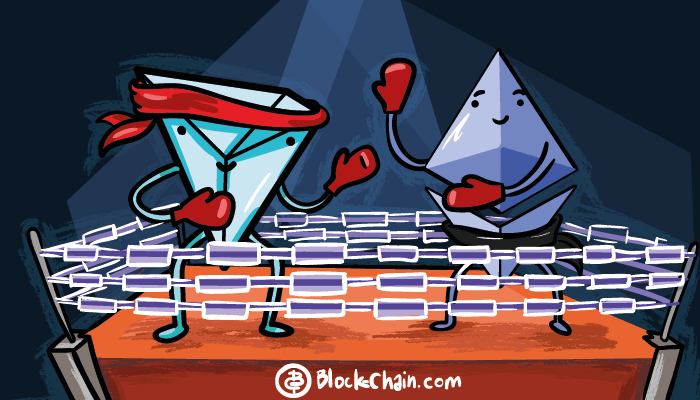 Competitors measure their strength on the platforms market ring

Justin Sun, founder and CEO of the project, constantly calls his brainchild a substitute to Ethereum. How fair is that? TRON is entirely Chinese, with its central development team based in the People’s Republic of China and national companies amongst its key investors.

A business like this would not be able to exist in the country where crypto operations are literally forbidden without any support of the authorities. And here’s the evidence - Justin Sun holds the post in the local authority. The project is aimed at building a global and free content entertainment system based on the blockchain technology and at providing developers with custom-built blockchain which is convenient, stable and secure.

As a global purpose, the company has picked ‘decentralization of the Internet’. Project’s technical characteristics are slightly better than Ethereum’s, and TRON keeps reminding us this: for example, current network specification is 2000 transactions per second while its competitor can only exceed 20-25 transactions per second. Moreover, it allows launch on its base large decentralised projects, which is extremely important when there is a large audience.

TRON doesn’t implement any commision for transactions and uses Delegated Proof-of-Stake protocol to validate the transactions. Noticeably, the project launches decentralised applications based on smart contracts, using its own virtual machine (TVM), completely compatible with Ethereum but using another language.

In this June TRON started its move from Ethereum to Odyssey 2.0, which started with launching the tokens of its protocols instead of ERC-20. June, 25th was named the Independence Day, but the company admits that it still has a lot of work, as it also has high hopes.

Lately, the project made one more big move by acquiring BitTorrent, a peer-to-peer global network which reportedly has more than 1,000,000,000 registered users all around the world. According to Sun’s announcement, it will help to create the largest decentralised ecosystem in the world, connecting TRON and BitTorrent.

In the present circumstances, it’s not too hard to agree with Justin Sun, since Ethereum is going through a really tough time, with its sinking price. Arthur Hayes, the BitMEX CEO, expressed his slightly pessimistic opinion on Ether’s price, predicting it to hit double-digit price levels. He claims that its price has been supported by ICOs since at least 2017, saying with colourful illustrations :

“The VC investor who has never suffered the vagaries of the market is as green as the noob who thinks he or she can go from 1 to 100 Bitcoin in a few trading days. They don’t have the mental strength to cut positions to limit further losses, or backup the truck and buy opportune dips even though they are down. More importantly, LPs can now see an objective last price for a particular token, and can’t be hoodwinked. They will attempt to be a Monday morning quarterback, and that only adds to the VC investors’ anxiety. At a certain point, they dump everything they can.”

Time will tell who deserves to win this competition. One must say, both networks are strong and promising, but the crypto market is volatile and sometimes unpredictable - so get yourself some popcorn and watch!