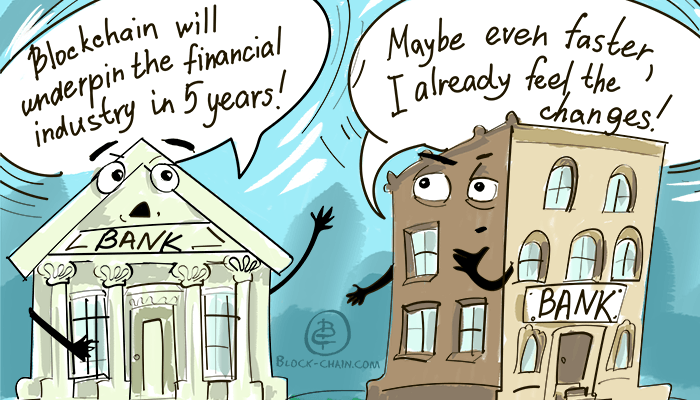 ING Group is a Dutch multinational financial conglomerate with headquarters in Amsterdam. In his interview to CNBC representative at the Money 2020 conference in Amsterdam, Mr. Hamers has mentioned that the technology has to serve the purpose that the bank stands for. He said that ING changed from an hierarchical structure to an agile collaborative structure in order to gain innovative momentum. Mr. Hamers also see tech giants as partners to a certain extend, rather than competitors.

Carlos Torres Vila, CEO of BBVA, a multinational Spanish banking group and the second largest bank in Spain, said their financial organization is already taking measures to adopt technology to their needs, as the blockchain allows to increase efficiency of several processes, CNBC reports from Money 2020 conference in Amsterdam.

Earlier in April, the BBVA became the first global bank that issued loan via blockchain. Entire process from negotiation to signing was carried out on mutual ledger that kept the bank and the borrower informed about the loan’s stage. The technology allowed reportedly to cut the negotiation time from days to hours. The bank, moreover, starts a pilot program in cooperation with Spanish telecom company Indra.

Amsterdam is holding European “Money 2020” conference, Europe’s biggest FinTech event on June 4-6th. The conference has over 5000 participants from more than 1500 companies and 80 countries, representatives of whole financial ecosystem including payments, FinTech and financial services. The blockchain stands on the agenda among other themes.