Duo Security specialists studied 88 million Twitter accounts and developed a special methodology for defining large-scale networks of Twitter-bots. Due to this development, it became possible to find a huge network with at least 15,000 cryptocurrency scam bots. 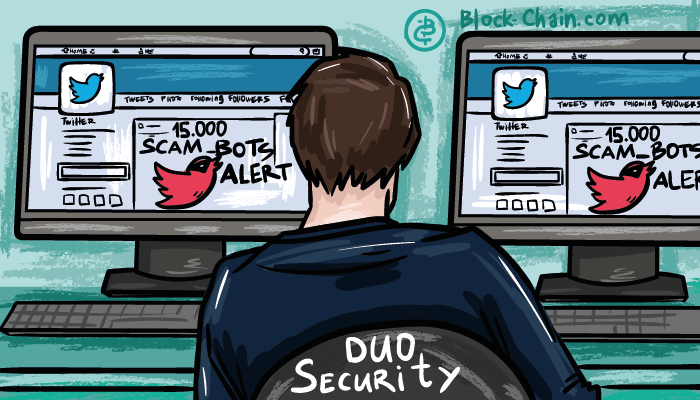 This network also includes fake celebrity accounts, crypto exchanges, media, verified accounts and so on. The researchers analyzed the content and description of profiles by 20 characteristics. It allowed identifying the bot that publishes messages, "hub" - bots, which are actively followed by other bots, and bots that mark up the popularity of certain messages by adding them to favorites.

The problem of scam bots is quite serious right now. Recently, even Ilon Mask has publicly stated that it was necessary to fight the epidemic of scam bots on Twitter.

Representatives of Twitter have already got acquainted with the research data and stated that the company was aware of such manipulation attempts and was struggling with them. According to the company's calculations, less than 5% of users of the service are engaged in spamming.

One of the most popular schemes for attracting funds from crypto investors on Twitter is holding special events on behalf of public people of the crypto world.

For example, after technical problems with the work of the Telegram messenger in April, the scammers on behalf of its founder Pavel Durov thanked the Twitter users for their support and invited them to participate in the drawing of 5000 ETH and 1000 BTC. The other case went much ahead. In May, the Twitter account of the previously deceased creator of the pyramid scheme "MMM" Sergei Mavrodi had an announced of the launch of the "Mavro-office", offering to exchange MMM coupons for the MVR cryptocurrency.

And it’s not all! And at the end of February, fake Buterin, Ilon Mask and Warren Buffett stole 5000 ETH from Twitter users.