Although crypto regulatory framework keeps being developed almost all around the globe, there are still many white spots and uncertainties. For this reason, Goldman Sachs, a multinational financial services company and investment bank, has decided to postpone its plans to launch a desk for trading digital assets. 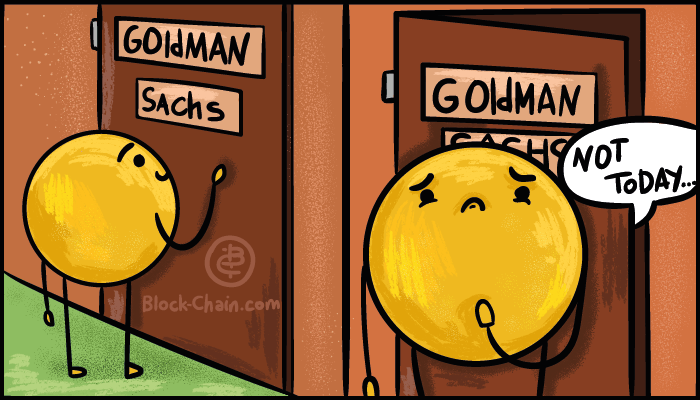 Hello, can a token start a trade please? No? Eh...

The news were firstly reported by Business Insider on Wednesday.

In previous several weeks, the company stated that there is a lot of work to be done to allow a regulated bank to trade cryptocurrencies, and a large part of it is outside the bank’s jurisdiction. Goldman Sachs commented on the problem, saying that at this point, a conclusion on the scope of the digital assets offering hasn’t been reached yet.

The launch of a new trading operation focused on digital assets was announced by a Wall Street giant in December of 2017. Since then the idea has been developing for year, and now the report poured cold water on sentiment. Apparently, this announcement affected the bitcoin’s price in a negative way, as it was trading down nearly 5% at $6,985 USD on Wednesday.