An unidentified hacker managed to successfully execute a “double spend” attack on the Bitcoin Gold cryptocurrency exchange last week, causing the exchange to lose millions and making it at least the third cryptocurrency to yield to a network attack 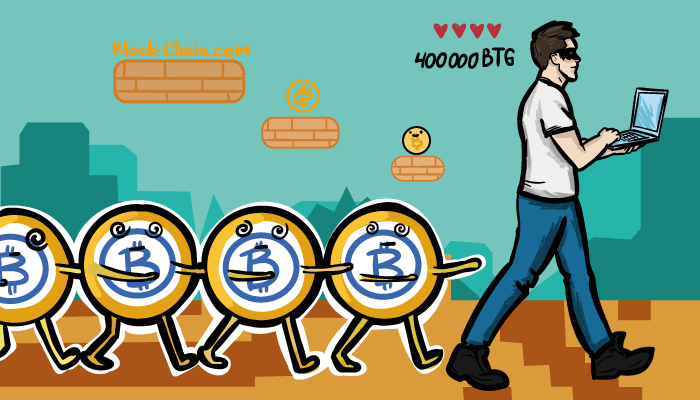 like puzzled rats in the fairytale, coins just followed his wallet

Bitcoin gold is now estimated as 26th-largest altcoin that has a market capitalization of $827 million. Edward Iskra, the Bitcoin Gold director of communications, first informed the users about the incident on May 18th, reporting that a malicious miner stole from the exchange over $18,6 million so far as more than 388,000 BTG coins have passed through this account.

In fact, the money was stolen not from users as they didn’t lose anything, but from the exchanges which have such consequences as destabilization of the backup funds or even insolvency which may cause troubles with money withdrawing. Although the clients didn’t lose their money instantly, if these attacks continue, several exchanges may go bankrupt which will cause material damage to the investors.

To execute this attack, the hacker had to acquire at least 51 percent of the network’s total hashpower, which is hugely expensive, although the profit covered all the costs. These actions allowed him to obtain temporary control of the blockchain and after that, he started to deposit BTG at cryptocurrency exchanges meanwhile attempting to send the same coins to a wallet under their control.

As the hacker had control of the network, he managed to reverse transactions and to prevent the blockchain from resolving it and verifying only the first transaction. Therefore, the intruder was able to deposit assets on exchanges and quickly withdraw it again, reverse the transaction and transfer the deposited coins to another wallet. By the time the exchange realizes that the transaction is invalid, the assets have already been withdrawn and doubled.

The attacker received a large sum amounting to $18.6 million from May 16th to May 18th, when the last transaction was made, though there is a possibility that they will attempt to repeat the crime in case they still have access to control of the blockchain. Measures to counteract attacks were taken and the exchanges have been raising a threshold to confirm a BTG transaction but they were ineffective as the hacker continued to gain mining power and carry out the attack.

According to one of the exchanges which cooperated with Bitcoin Gold to find the attacker, they believe that a person or people that stand behind this incident have already tried to attack the original Bitcoin network using the same pattern.