Sometimes we notice that our devices suddenly start making more noise and the productivity falls. This may happen when the CPU usage is too high, so don’t rush to ask a specialist for help, as the chances are that you became a victim of a cryptocurrency-mining virus. The first attempts to use computers as cryptocurrency miners without the owners’ permission date back to 2011. 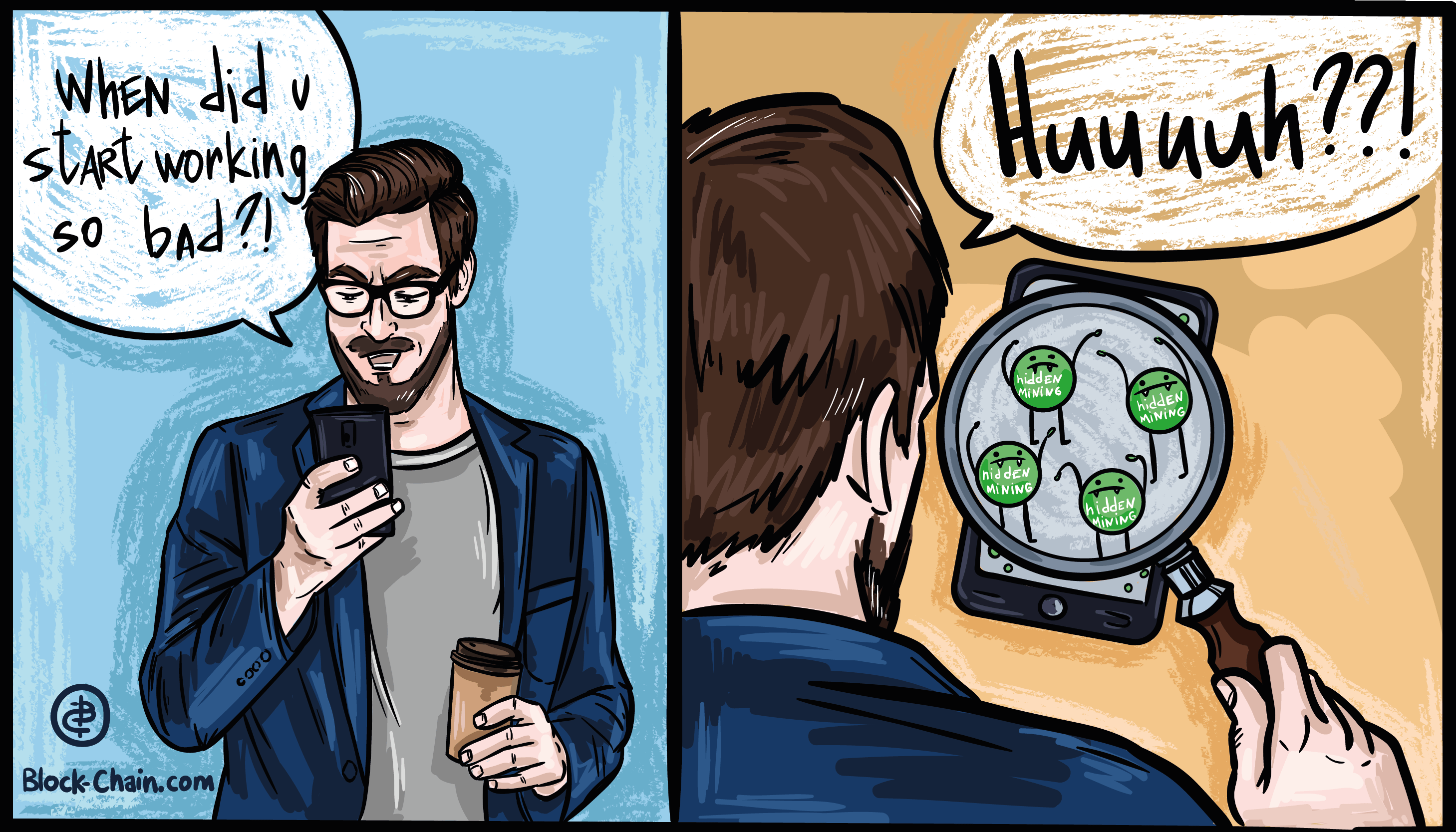 Hidden apps mine cryptocurrencies, what to do?!

A company called Symantec reported about the Trojan. Badminer virus using computers to mine Bitcoin. With every year the popularity of the crypto industry increases, and so does the cybercriminal attention and what we have now is a tremendous amount of a bitcoin mining malware. Noteworthy, more and more hackers make viruses aimed at smartphones since the industry is rapidly developing and their productivity grows bigger every year.

How does it work?

Bitcoin mining viruses run on the affected host machine and do cryptocurrency mining on that machine in the background. Since mining is considerably a resource-intensive process, it can take up a substantial amount of resources of the device.

Cryptocurrency mining software can get into the system through a variety of ways, as any untrusted software that a user installs can also secretly install a miner along with it. In some cases, these miners run only when the parent software is on, but others are entirely separate processes that start along with the system.

However, the described way was popular with the criminals years ago. Now they use a more lightweight and less noticeable form of hidden cryptocurrency mining by running a JavaScript file from within the browser. It does not demand any exploits or vulnerabilities since instead of infecting the computer, the website is being infected with malicious ads. A user visits an infected website with JavaScript enabled, and the mining begins.

Why is it dangerous?

With some cryptocurrencies, including Monero (XMR), mining is fast and simple and doesn’t demand a specialized computer to process the transactions. But others and especially Bitcoin are really complex and therefore slow to mine, requiring a large amount of processing power. It makes the CPU usage skyrocket, and simple tasks would become annoyingly slow.

Fans on the computer would work extremely intense, and the laptop’s battery life might take the noticeable heat. Beyond that, some malicious software may also steal protected data along with cryptocurrency mining or intentionally cause damage through other ways.

How to find it and what to do next?

The easiest way to know if your computer is being used for mining is to watch the CPU usage. A normal percentage for casual usage, including browsing the web, taking notes and so on, is 20 percent or even less. If it is significantly higher, it should give you a sign that JavaScript is being used for hidden processes.

To reduce the CPU usage, you should close the tab. If it still doesn’t drop, the computer is probably infected with malicious software. In this case, anti-malware software is recommended.

It is indisputable that the amount of a cryptocurrency-mining software is rapidly growing. According to the statistics, the first quarter of 2018 saw about 3 million of network viruses, which is 7 times bigger than the last year’s figures. To protect the devices, it is reasonable to use qualified antivirus software and to pay more attention to the internet security.