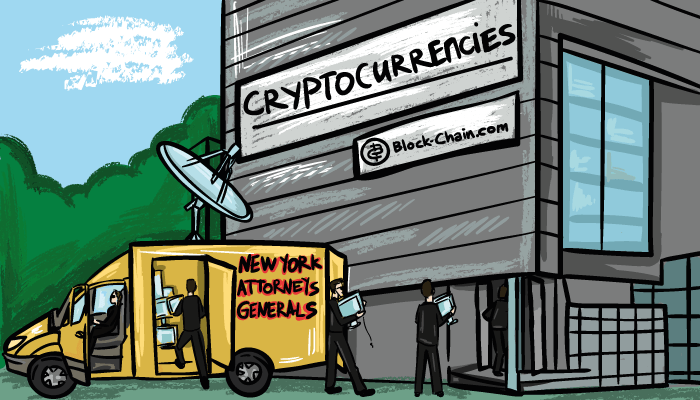 The agency is aimed at controlling various aspects of the cryptocurrency capital markets space, providing clarity for exchanges and clearing houses and it has been proactive since it was set up. As the OAG announced in its press release, it sent information requests (as it states, “inquiries”) to thirteen cryptocurrency trading platforms as follows:

The request mentions that the recipients were chosen due to their status as “major virtual cryptocurrency trading platform”. The list includes companies which theoretically have no nexus to New York and entities that operate in New York and have completed the BitLicense application. The inquiry demanded information on blocked New York users and was characterized as a part of an effort to protect cryptocurrency users.

It seeks information on several topics of concern, including ownership and control of the exchange, trading policies, operations and fee structure, internal controls, safeguards to protect customer funds from different risks and other aspects. The above-mentioned press release states that the OAG, as the major law enforcement agency in New York, uses the information to protect consumers and ensure the fairness and integrity of local financial markets.

In response, the exchanges seem to express a willingness to work with the OAG, except Kraken, which has not been enthusiastic and has declared its unwillingness to engage with the Inquiry through social media, questioning its true intent. Although the Inquiry reveals its best intentions, it might be potentially stepping into the realm of the jurisdiction of New York State’s Department of Financial Services (DFS), and the OAG, seemingly self-aware, notes that their role in this sector is separate from, but complementary to what DFS does.

In spite of the long-term direction of the Virtual Markets Integrity Initiative, it looks like another step forward in New York’s attempts to launch cutting-edge regulatory oversight on crypto markets, and it doesn’t seem to be well coordinated with existing regulations. This step is taken at a time when there have been calls to change the existing state patchwork of laws in the crypto area and to replace it with coordinated and coherent regulation. Therefore, as it seems, New York is continuing to tightening grip on crypto space and is working on solidifying a federal scheme to serve to preempt the states in this area.