John McAfee, the founder of the notorious antivirus soft provider and cryptocurrency guru fond of predictions, announced the release of a new fiat cryptocurrency on May 29th. 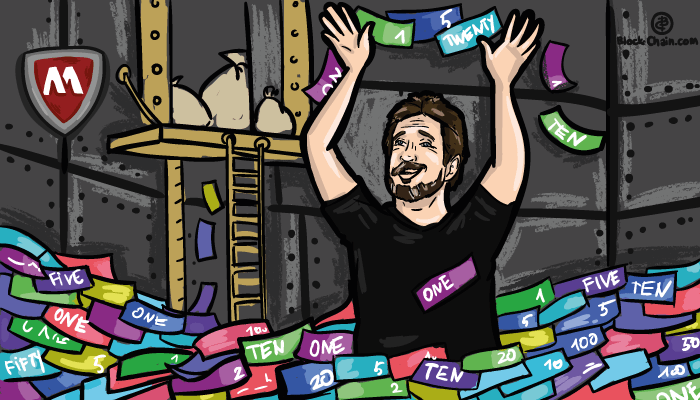 McAfee is famous in the crypto community for his long-term predictions, controversial remarks, challenges and campaigns and recently he has hinted there is a possibility that he might launch his own revolutionary cryptocurrency.

Later the entrepreneur revealed the prototypes for a series of banknotes and stated that it would be called “McAfee Redemption Unit”. Whereas the graphic is low resolution yet, it is aware that the currency will be printed on paper and will have holograms on both sides. It will be serialized, collectible, convertible and, what is more important, linked to the blockchain, which means that a fiat currency will be backed by cryptocurrency whilst usually it’s vice versa.

The series is coming on June 23rd and, as it was precise, consists of seven denominations and each of them demonstrates a picture of McAfee himself or other well-known person associated with cryptocurrency: Brock Pierce, Bitcoin foundation executive director, Jihan Wu, Bitmain CEO, or Roger Ver, Bitcoin.com CEO. On the reverse side, one can read a message with instructions to bring the note in Mexico.

John McAfee now has pretty big influence with his tweets and cryptoanalysts strongly believe that this announcement might have significant results for the cryptocurrency. There are occasions when one his tweet has resulted in a huge increase of investments or cryptocurrency prices. He has more than 800,000 followers on Twitter and, considering this fact; he definitely has potential to get millions of supporters. Due to his impact, now he charges $105,000 per tweet for promoting crypto projects.