It is no secret that Ethereum has occupied a prominent place in the crypto world, and the recent research made by cryptocurrency analyst and YouTuber Kevin Rooke has proved it. The researcher discovered that 94 out of 100 successful blockchain projects are built on Ethereum platform. 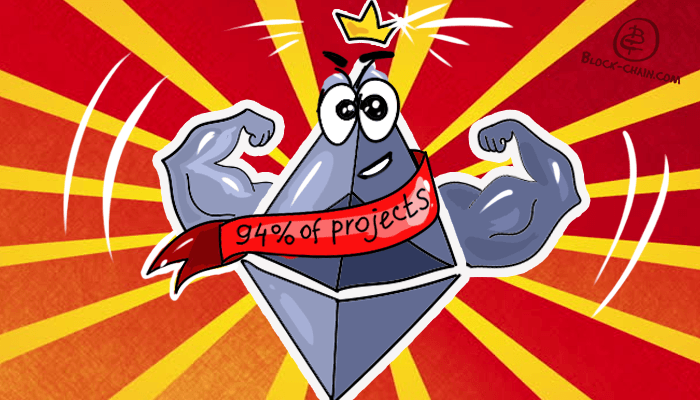 Ethereum powers 94% of all crypto projects

Ethereum protocol serves as a base for a decent amount of cryptocurrencies and tokens, including such payment-focused networks as Bitcoin, Bitcoin Cash, Ripple, Litecoin and even Tron, the 10th largest cryptocurrency in the world with market capitalization of more than $3 billion (though it is now in the process of relocating to an independent blockchain). Moreover, the list of the platforms based on the ERC20 token standard of Ethereum includes $2 billion China-based VeChain, $1 billion Ontology, $900 million ICON which is headquartered in South Korea, and $850 million Zilliqa, a Sharding-focused blockchain project.

The network indeed deserves to be called one of the top blockchain platforms for smart contracts, noted Rooke. Beyond that, he mentioned that the Ethereum community counts a huge amount of developers:

“You simply cannot build excellent applications and products without a big developer base behind you. But today, Ethereum has roughly 250,000 developers building on its platform. The industry is still really small [and thus], 250,000 is a shocking number. Ethereum’s development framework called Truffle already has more than 500,000 downloads and even through the price fall of 2018, development interests have continued to rise.”

However, Rooke emphasized that capital investment is a necessary, but not sufficient condition for creating a leading blockchain project specifically for decentralized applications. The Ethereum protocol’s full potential can only be realized through developers who can build the underlying infrastructure and make it easy to launch applications. It is indisputable that money can kickstart the process, but at the same time in crypto everyone has money, including Ethereum, and it neutralizes the competitive advantage.

Over the past year, alternative blockchain protocols have emerged in order to compete with Ethereum network and become one of the leading decentralized application platforms. EOS, NEO, Cardano and several others have gained substantial market valuation and presence in the global market and have become its attempt to form a vibrant community. But still, Ethereum remains as the dominant smart contract platform.