The SEC determined the nature of cryptocurrencies

The US Securities and Exchange Commission finally seems to have determined its definition of the nature of cryptocurrencies. William Hinman, the SEC’s director of corporate finance, said this Thursday that two of the most significant digital currencies in the world should be regulated in a different way than stocks and bonds. 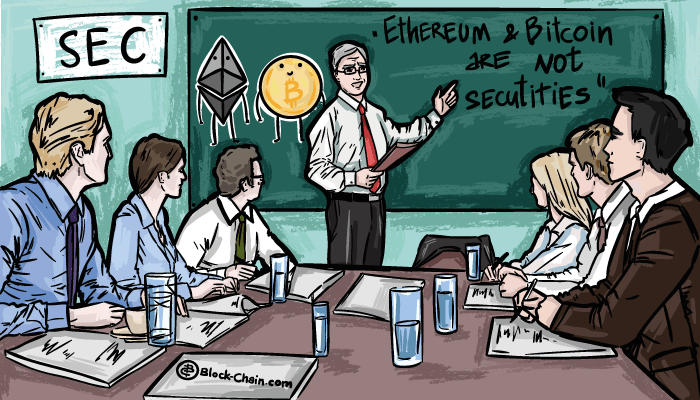 Bitcoin and Ethereum is not a security

However, he didn’t elaborate on specific methods of controlling bitcoin and ether, cryptocurrency behind Ethereum, keeping the crypto community guessing.

The announcement was made at an industry conference held in San Francisco, where Hinman has claimed that these leading crypto tokens don’t meet the criteria for regulation typically applied to traditional equities:

“Based on my understanding of the present state of ether, the Ethereum network, and its decentralized structure, current offers and sales of ether are not securities transactions.”

The given commentary implies that, unlike companies required to educate investors about the condition of their business, the developers of top cryptos don’t have such obligations. In fact, bitcoin and ether are developed diffusely, by many separate people, and there is no single and centralized entity, explained Hinman.

This declaration can be considered as a victory for cryptocurrency advocates who have claimed that applying traditional regulation to a novel technology is irrational, as it might inhibit its growth. The speech also affected in a good way bitcoin’s value, and three minutes after it was over, the price spiked by nearly 3 percent, reports Coinmarketcap.com. Meanwhile, ether’s price increased by 9 percent, which is a good sign for the crypto industry which has been in decline recently.