What provokes the decline of the crypto industry?

Today, June 13th, leading digital currency Bitcoin plummeted in its value and lost nearly 7 percent of its price in several hours, dropping below $6300 and therefore sinking to a 70-day low. 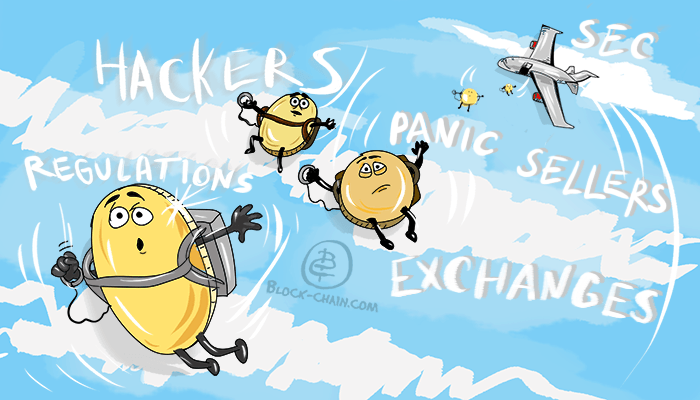 This point seems close to this year’s low of $6,048 and, moreover, the entire cryptocurrency industry shows a similar trend, as the amount of more than $25 billion in total value was lost in a single day.

Bitcoin and altcoins are known to be pretty volatile, and crypto investors are used to the market fluctuations, but, as more than $53 billion in cryptocurrency wealth was obliterated, analysts show concern. Ethereum, one of the major cryptocurrencies, experienced a drop of 11 percent to $474.5 USD as recorded at the time of writing on June 13th, and the price continues to dip lower and lower. How low can the prices fall? To answer this question, it is rational to investigate probable reasons why the crash occurred.

At the same time, the same source reports, a small South Korean exchange Coinrail, with daily volume of $2.5 million, was attacked by hackers on June 10. The intruders made away with a number of various crypto coins, its total amount $37,2 million went missing, as Korea’s Yonhap estimated. Still, it remains uncertain, how or whether Coinrail will compensate its customers.

Moreover, Apple revised its App rules on crypto industry and applied new regulations on crypto apps in the store. New guidelines forbid crypto mining activity and introduce some other changes.

Times are not the best for the crypto industry; however, there is no need to panic: the market system shall recover after a while. Drops like this feature volatile cryptocurrency industry and investors don’t have to worry, especially as there are good examples such as dot-com bubble. It occurred in the 1990s and consisted of a rapid rise in equity markets caused by investments in Internet-based companies.

Confident analysts say that Bitcoin is a similar phenomenon, and this is an optimistic comparison: as statistics show, in the beginning, its growth was fueled by hype and only after a recession the real development began.